Wherever you want it to be!

‘Where ever you want it to be’

Kuppla Yard started life as a 6ft long layout (hence couple a’ yard), but like Topsy it has grown! It was  inspired by my old friend Jack (Shortliner) Trollope's Box Street Yard design, and influenced by Chris Gilbert's Old Goldern Road layout. I have tried to take it to the next dimension, so forgive me guys!

The layout now is 11ft (including the fiddle yard), but only one foot wide. It is self-supporting, and requires mains power only to get it working. A 'girder type' base supports the layout, and the whole shebang fits into my Honda Jazz for transporting around the bazaars.

The scene depicts the railroad still at work in the wee small hours! A darkened city backscene and blue LED floodlighting give a moonlight glow. Ambient sound and some theatrical lighting effects help to make the scene a little different to the usual. (Look out for ‘Fat Joe’s Disco’, and 'Pompey Lil' staggering home after a hard night's work!).

Kuppla Yard represents a rail switching yard on the outskirts of a large industrial town, probably on the Eastern seaboard. However, it can be ‘Wherever you want it to be!’

Operation is from the front, using an  NCE Powercab DCC control, points being operated by the old ‘wire –in – tube’ method. Simple – but safe! I like to let the kids have a go too.

Locomotives feature full sound, the scene is lit by Kytes Lights.Neon signs by Miller Engineering, and random sequence light control by M-Tronics give plenty of interest.

Look out for Kuppla Yard at an exhibition near you! 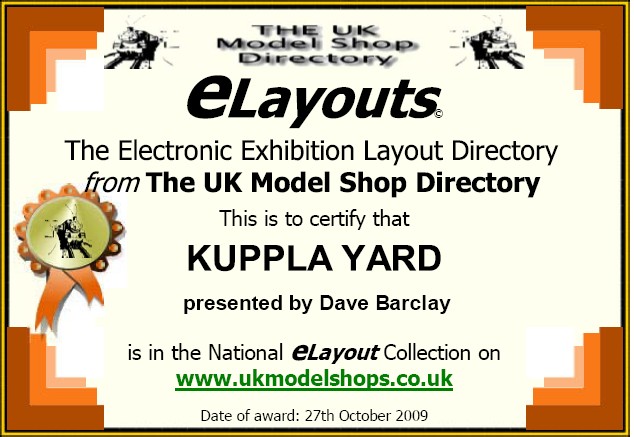